How I became a mother activist

Harnessing the power of parents in climate organising 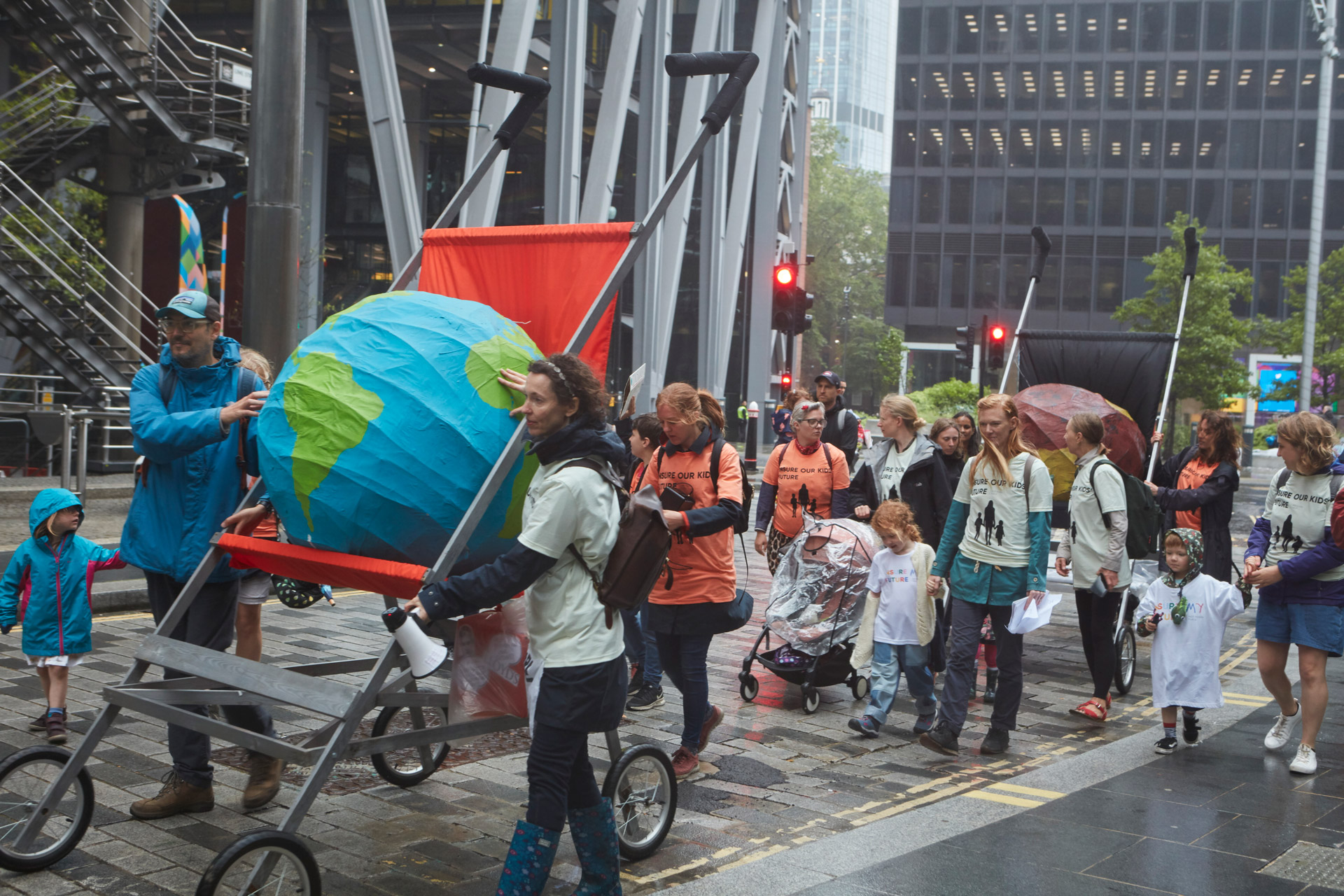 One Friday morning earlier this year, when I’d normally be racing to finish work emails and buy groceries for the weekend, I found myself standing in torrential rain outside Lloyd’s of London, one of the world’s biggest insurers of fossil fuels.

I was with a group of parents and their small children, including my own 3-year-old. We held giant props that had taken months to build, among them three-metre-high pushchairs carrying papier mâché planets, and an oversized Father’s Day card addressed to Lloyd’s chairman, Bruce Carnegie-Brown.

We were there to convey a vital, heartfelt message to Carnegie-Brown, himself a father of four: “Do what’s right for all our children and stop insuring and investing in fossil fuels.”

Meanwhile, thousands of others in our global network of climate–parent groups – from Argentina to Australia, Germany to Nigeria – were sending specially illustrated online Father’s Day cards to Carnegie-Brown, via Twitter, echoing our plea to stop insuring fossil fuels.

As we sang and chanted in the rain outside the towering Lloyd’s of London building, I gripped my 3-year-old’s little hand and a shiver went down my spine. I felt the potential of parents to fight for their children, and for the right to live on a healthy planet.

Our action eventually resulted in influential media coverage and meetings with senior staffers at Lloyd’s. These staffers suggested that we were having an impact, and said that they and Carnegie- Brown had been fielding questions from their own children about the climate crisis.

Waking up to the climate crisis

My journey into climate–parent organising started three years ago. As an aid worker and human rights campaigner, I’d met farmers in South Sudan who faced increasingly unpredictable weather patterns But the climate crisis seemed secondary to the violent conflict they faced. I didn’t yet understand that progress on human rights risks being destroyed by the climate breakdown.

A constellation of factors woke me up: the wave of youth strikes, the daring of Extinction Rebellion protests, and my 5- and 7-year-olds coming home from school with questions: Why was the world getting so hot? Why were so many animals becoming extinct like the dinosaurs? If the Arctic was melting and cars were polluting, why did we still drive one?

Then, by chance, I met some women who were planning a mother-led climate protest. Soon I was helping a team of volunteers organise a Mother’s Day climate march in central London. We wanted to show solidarity with youth school strikers, while creating a safe space for families with much younger children. Despite having no budget, the march drew some 3,000 people, many of them first-time protesters, and most with babies and toddlers in tow.

That event generated global media coverage and was the beginning of Mothers Rise Up, a volunteer network of UK mums. We soon connected with Parents For Future UK and other climate–parent groups in the UK and globally.

‘I felt the potential of parents to fight for their children, and for the right to live on a healthy planet.’

Over the past five years, the climate–parent movement has grown exponentially. Two sister networks – Parents for Future Global and Our Kids’ Climate – bring together some 60 groups from over 20 countries. There are even several grandparent groups. While these groups differ, we are united by some common aims and methods: 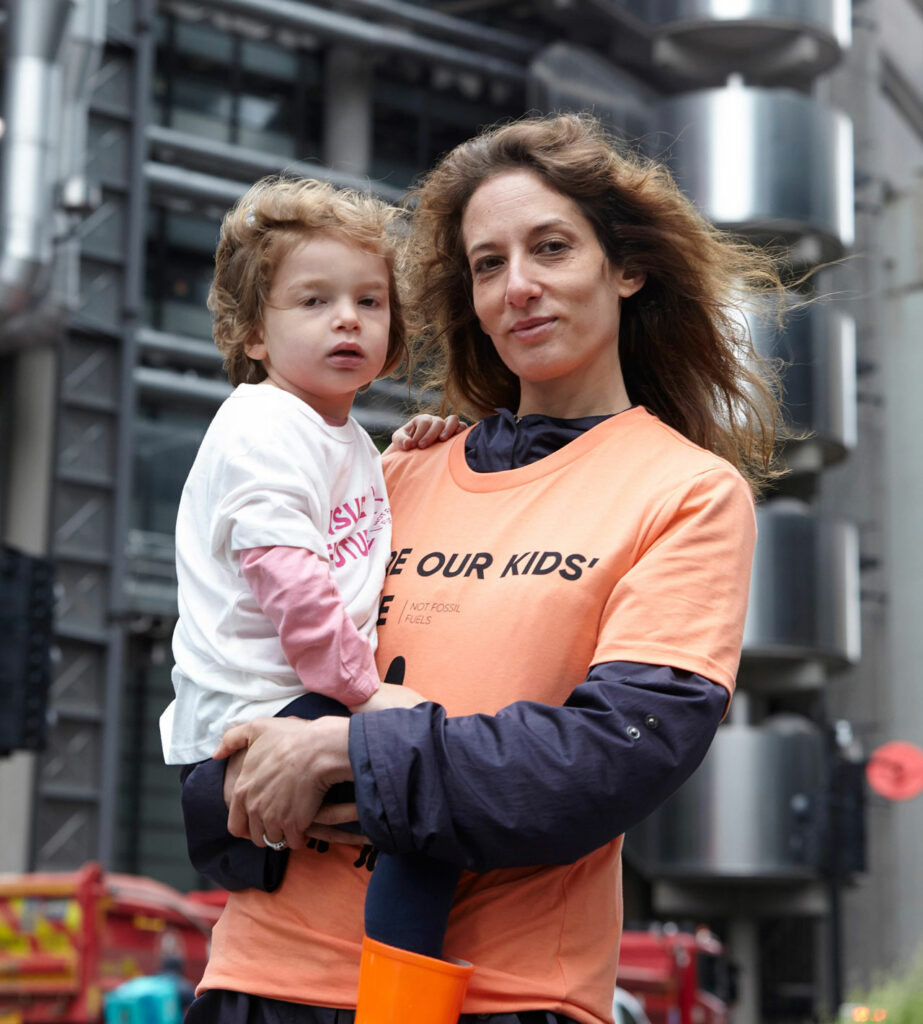 The climate–parent movement has enormous potential. Parents are everywhere: in boardrooms, governments, factories, schools and voting booths. I’ve also seen the simple power of chatting at the school gates, to normalise the conversation on climate. Parents – especially mothers – can be inspired to sign petitions, share on social media, engage with local politicians and join climate actions.

Although being a parent doesn’t necessarily create a unifying identity, evidence is emerging that the parent-led frame on climate change has resonance across ideological boundaries. Research from groups like More in Common and Climate Outreach suggests that certain notions resonate across diverse segments of British society: protecting children; giving them access to nature; and pointing to a sense of intergenerational duty (Wang et al., 2020).

While men are increasingly joining in, the climate–parent movement around the world is predominantly led by women. Often they work full-time and then join post-bedtime Zoom calls. They push for climate change in their workplaces, and drag recalcitrant children to climate events. Some take the risk of leaving traditional jobs in order to start new climate networks and campaigns.

The scrappy, volunteer nature of this work has benefits: we have an authentic voice and local reach that big charities struggle to replicate. Most of us have never met in person, but we share genuine bonds of friendship and solidarity, forged through countless WhatsApp messages and campaigns.

But funding is a chronic issue, along with volunteer burnout. A handful of parent–climate groups are national NGOs with paid staff. But most activists are unpaid, and also have the demands of work and child rearing, compounded by school closures and lockdowns.

Some much-needed funding is arriving. For instance, Our Kids’ Climate and Parents For Future Global have created a fellowship to support parent activists around the world, financed by Equation Campaign, UMI Fund and NorthLight Foundation. We’re also getting savvier about how we collaborate with existing organisations. We coordinated the Lloyd’s of London action with InsureOurFuture, a group that seeks to persuade insurance companies to stop underwriting fossil fuels.

Despite the challenges, I’ll keep going, alongside thousands of other activists. We’re campaigning for a just transition away from fossil fuels to clean energy and for a safer, fairer, brighter future for our children. These days, when my kids come home from school asking about the latest wildfire or smashed heat record, at least I can say: “I’m trying, with so many other parents, to protect you and our precious planet.”