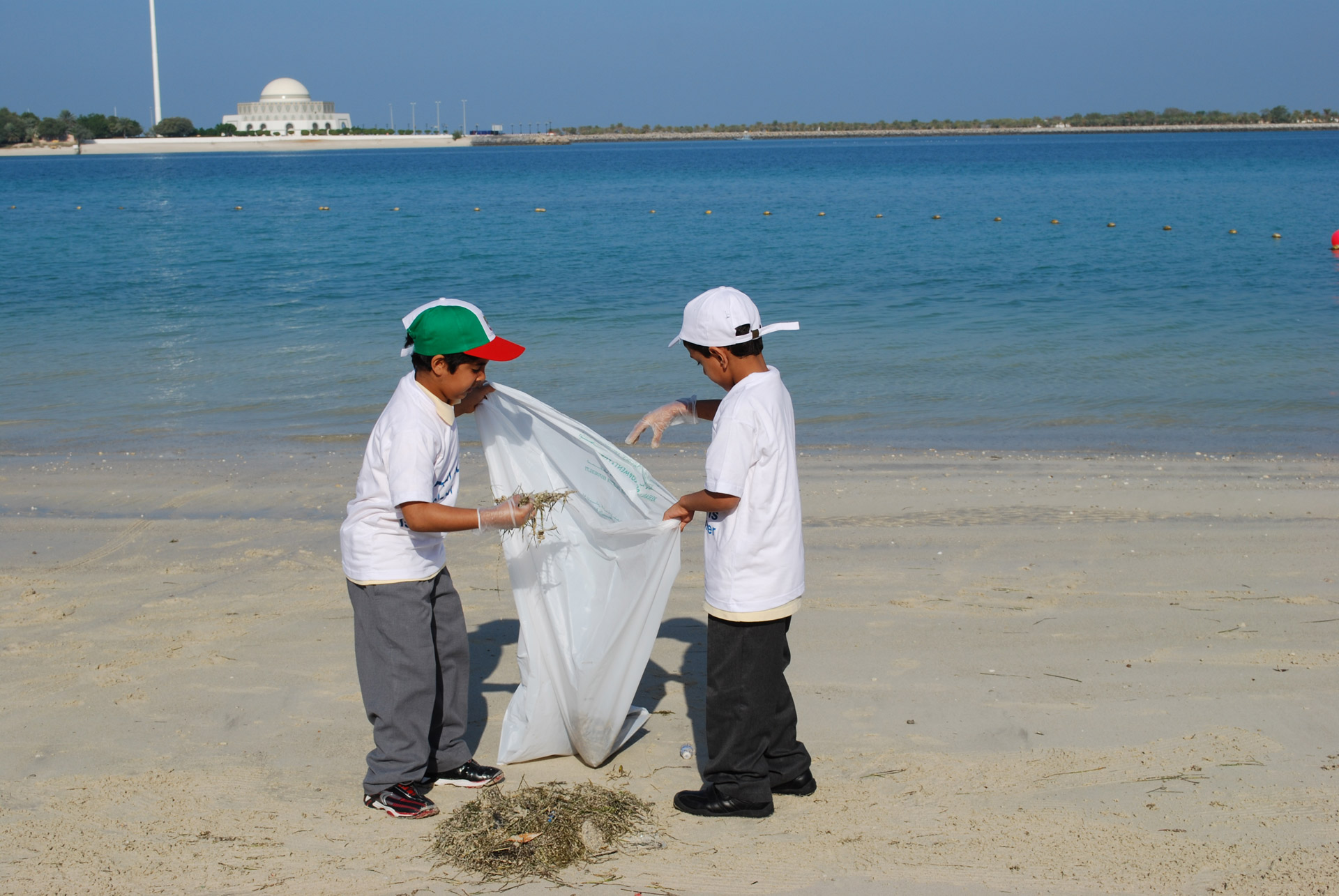 In Abu Dhabi Emirate, capital of the United Arab Emirates (UAE), many stories are unfolding. One of the most noteworthy is that of a young country, undergoing rapid social and economic development, addressing climate change by putting the youngest in its population at the heart of its efforts.

Abu Dhabi recognises the magnitude of the threat from climate change and is determined to meet it head-on. Through its multiple impacts on basic human needs – such as food, water and shelter – climate change is by far the biggest global health threat of the 21st century (Costello et al., 2009; Ministry of Climate Change and Environment (MOCCAE), 2021). Children are particularly at risk (Ebi and Paulson, 2007; Xu et al., 2012; UNICEF, 2015).

While the emirate’s contribution to global warming through greenhouse gas emissions is relatively small overall in comparison to other developing communities (Environment Agency – Abu Dhabi (EAD), 2019), its per capita emissions are among the highest in the region. Abu Dhabi has initiated numerous high-level strategic actions to address the issue (Government of Abu Dhabi, 2014; MOCCAE, 2017). A review of these initiatives indicates that there are significant co-benefits regarding impacts on health. The initiatives aim to reduce emissions, which will also result in improved air quality: by 2035 it is estimated that this will result in the avoidance of 3,219 premature deaths and 82,853 fewer healthcare visits (Abu Dhabi Global Environmental Data Initiative, 2015). Strategic actions include the mitigation of emissions through initiatives such as mangrove planting, mass transport, and solar and nuclear energy projects.

Even more is being done at the grassroots to address the impacts of climate change on children as young as 4 years old. Clean air is especially important for young children, as they need to be outdoors to be physically active and play. Physical activity is fundamental for children’s health and development (Marmeleira and Duarte Santos, 2019). According to the World Health Organization, it can reduce symptoms of anxiety and depression. Thanks to outdoor play, children progressively gain mastery over their bodies, improving their gross motor skills such as running, jumping, skipping and climbing (Little and Wyver, 2008; Little and Sweller, 2015). Research shows that outdoor environments are more conducive than indoor environments to improving children’s motor skills (Flôres et al., 2019). When children play in natural landscapes, the risk of asthma seems to decrease. Preschoolers are twice as active and less sedentary when outside, reducing their chances of developing obesity (Tandon et al., 2018).

The EAD has been engaging young people through a variety of outreach programmes for years, raising awareness of environmental issues and promoting behaviour change among other actions. The most noteworthy of these programmes are the Enviro-Spellathon, Sustainable Schools Initiative, Sustainable Campus Initiative, and Connect with Nature.

Enviro-Spellathon promotes eco-literacy among children aged 4–11 years. Over 90% of Abu Dhabi’s schools are registered (91.7% in 2019), and 1,814,297 students have benefited since 2001 by becoming more aware of environmental issues. Enviro-Spellathon brings children closer to their environment by including it in their curriculum, raising awareness and appreciation of the environment as they learn to count and spell.

Originally launched in hard-copy book format, with a Braille version, the programme is now available through an app featuring 18 games, 12 animations and nine interactive animations with voice-overs. Versions are available in English and Arabic.

Sustainable Schools Initiative (SSI) has been running since 2009, with a focus on turning awareness into action among students aged 12–17 years. Also known as Al Madaris Al Mustadama this initiative is implemented in 150 schools by EAD, supported by UAE’s Ministry of Education and the Abu Dhabi Department of Education and Knowledge, and sponsored by bp plc (formerly known as British Petroleum). The initiative has been so effective that the United Nations cited it as an example of a global best practice.

From 2009 to 2020, SSI has generated 2,163 eco- club projects and engaged 272,703 students on environmental field trips to locations such as Al Wathba Wetland and Ramsar Site, one of the first sites in the region to appear on the International Union for Conservation of Nature (IUCN) Green List. In the academic year 2018–2019, 59,537 students benefited from SSI through activities such as the School Green Audit and student eco-projects, resulting in 100 tonnes of CO2 saved. The children gain a greater understanding of their environment, and learn behaviours to protect the environment and how to engage with the local community.

Over time SSI has evolved to become self-sustaining by building capacity among teachers through a training-of-trainers programme, institutionalising the School Green Audit as an official Quality Conformity Council standard for auditing the environmental footprint of schools, and automating the uploading of audit results through an online interface.

SSI has been awarded numerous accolades including Green Middle East Award for Best Environmental Awareness and Education Project in 2013. In 2015, the UN Environment Programme declared SSI an innovative model for education in sustainable development and recommended it be applied around the world. In the same year, the UAE Ministry of Climate Change and Environment adopted SSI for north emirates schools through the Ajyalna initiative. In 2017, SSI was recognised by the Global Environmental Education Partnership as a global case study in environmental education.

Sustainable Campus Initiative (SCI) expanded the SSI from schools to universities. Running since 2014 and focusing on ages 18–35, the emphasis is on turning ideas into action. SCI is sponsored by Borouge, and aims to increase sustainability practices, promote awareness and knowledge, and elicit proactive behaviours to protect college and university campuses in the UAE. The main objective is to strengthen and build leadership capacity amongst the emirate’s young people to address issues of environmental sustainability and be agents of change.

Similar to SSI, the SCI programme includes elements such as Green Audit, Sustainability Action Projects (in the community) and, perhaps most importantly, the Green Youth Majlis (GYM), which facilitate dialogue and the sharing of ideas and best practices among young people. The GYM is a forum that brings together innovative ideas and projects to enhance sustainable communities for future generations. It has received acknowledgement from various international parties including the World Summit in Japan.

Connect with Nature (CwN) has been running since 2018 and focuses on ages 15–30. Aware of the need for young people to reconnect with their natural heritage, EAD partnered with Emirates Nature–WWF and the International Fund for Houbara Conservation to create a programme encouraging young people to discover the natural wonders of the UAE while also building the leadership skills necessary to uphold the legacy of the late Sheikh Zayed bin Sultan Al Nahyan.

‘There is growing evidence of the impacts of climate change and its potential to jeopardise the health of our children.’

Abu Dhabi and the seven Cs

In the book A Parent’s Guide to Building Resilience in Children and Teens: Giving your child roots and wings, Kenneth Ginsburg describes the “7-C plan” for building resilience in children (Ginsburg, 2006).

Abu Dhabi achieves this by providing information to young people that raises awareness of environmental issues (including climate change), building competence and confidence. SSI helps students build a connection with their environment through field trips and helps them build character and a sense of value through contribution by devising and implementing projects in the local community. SSI also requires students to assess their school’s environmental footprint and devise projects to mitigate its impact, building their coping and control skills. Through a comprehensive approach to youth engagement, Abu Dhabi helps young people build their 7-Cs of resilience to climate change and environmental impacts.

There is growing evidence of the impacts of climate change and its potential to jeopardise the health of our children. However, there is also optimism that concerted effort, at both the strategic and the grassroots levels, will help our children by mitigating the worst effects and building their resilience to climate change.