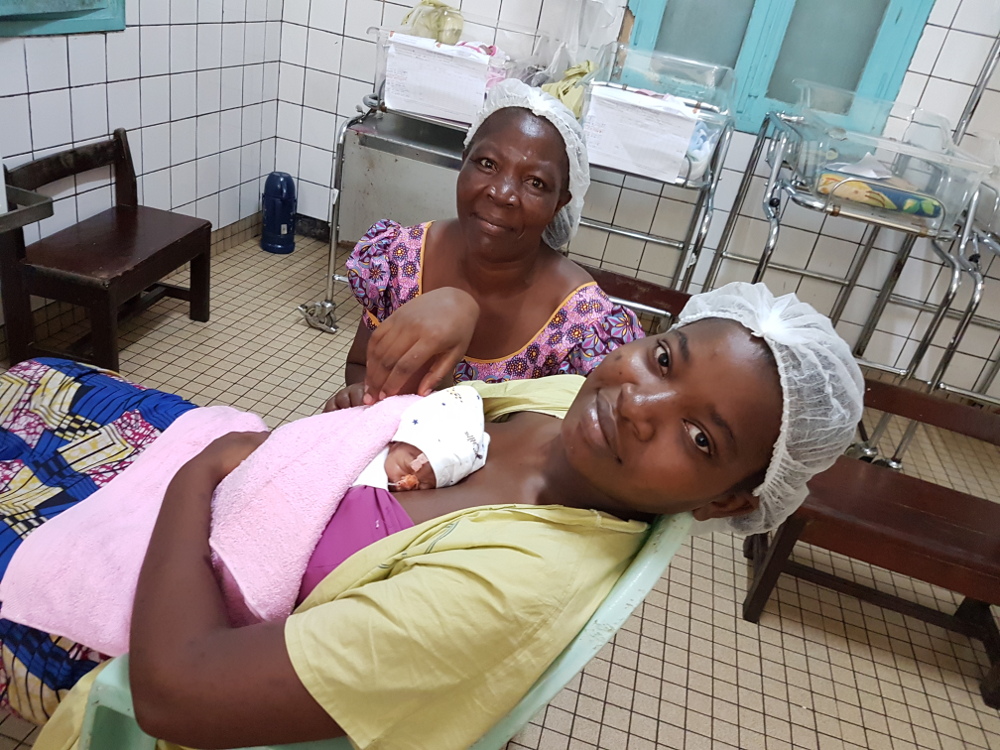 Kangaroo Mother Care (KMC) is widely recognised as an important evidence- based, low-cost intervention for improving the health and survival chances of premature and low-birthweight infants. So called because it resembles how kangaroo babies are carried around in their mother’s pouch, KMC consists of early, continuous and prolonged skin-to-skin contact between the caregiver and the baby, exclusive breastfeeding or breastmilk, and context-appropriate discharge and follow-up provided to the baby and his or her family.

The practice dates to a hospital in Colombia in the late 1970s, where incubators were overcrowded. Doctors instead encouraged mothers to wrap their premature newborn against their chest to keep them warm. They noticed good results, and published their findings. Interest grew, and in 1996 a group of researchers from different countries and from the World Health Organization (WHO) gathered in Trieste, Italy, and formed the International Network of Kangaroo Mother Care (INK).

Immediate skin-to-skin contact has been shown to benefit all babies (Moore et al., 2016), but the benefits of early, continuous and prolonged skin-to-skin contact (an average of 18 hours per day) are especially profound for low- birthweight (LBW) babies. LBW babies include those born before 37 weeks and those born later but still small for their gestational age. They account for around 15.5% of all births globally – and the proportion is even larger in low- and middle-income countries (Beck et al., 2010; Blencowe et al., 2013). They are significantly more likely to die shortly after birth or during their first year, and those who survive are significantly more likely to develop long-lasting health problems, particularly sensory deficit and neurodevelopmental disabilities (Lawn et al., 2014). They are also more likely to show signs and symptoms of instability in various dimensions such as sleeping and eating patterns, which adds to parental stress and combines with disappointment at the pregnancy outcome to put them at higher risk of being maltreated or neglected by their caregivers (Bakewell-Sachs and Gennaro, 2004; Frye et al., 2010; Kugelman and Colin, 2013).

KMC is simple to implement in the sense that it requires no specialised medical equipment; it does, however, often require fundamental changes in mindsets and procedures. Over the last two decades, a strong and growing network of committed practitioners, with support from the WHO and other major international players, have helped to establish KMC ‘centres of excellence’ in over 30 countries, and KMC units in thousands of hospitals worldwide. Relative to most other complex health interventions, KMC is already a success story of scaling in low- and middle-income countries.

However, relative to the scale of the problem, the coverage of KMC still remains insufficient – even in the countries where it has been implemented most successfully. Comprehensive implementation could contribute to averting an additional 770,000 neonatal infant deaths annually (Howson et al., 2013; Lawn et al., 2013b). For the infants who survive, recent evidence confirms that KMC has a lasting impact on their physical, social, emotional and cognitive development (Frye et al., 2010; Charpak et al., 2017).

As part of a workshop to mark the 20th anniversary of KMC, a group of practitioners and advocates met in November 2016 in Trieste to reflect on the lessons of two decades of scaling KMC, and to develop an approach to accelerate it. Research and case studies have shown that KMC implementation is most effective when it meets three criteria: it is integrated, staged and strategic.

1. Integrated: KMC as the centrepiece of a package of interventions

‘KMC implementation is most effective when it meets three criteria: it is integrated, staged and strategic.’

Mitigating the risks associated with prematurity and low birthweight requires not only timely and effective care at birth and in the immediate postnatal period, but also adequate follow-up and support over the first two or three years. Many of the complications that manifest in this time – such as visual or hearing deficiencies, motor deficiency and cognitive impairment – can be prevented or cured (Charpak et al., 2017).

An integrated package of essential interventions for low-birthweight infants – ‘KMC and beyond’ – would include:

Considering the burden of years of life lost and years lived with disability, and the effectiveness and the low cost of interventions, it should be a top public health priority to deliver this integrated continuum of care to premature and low-birthweight babies

This full package of ‘KMC and Beyond’ interventions is, however, beyond the capacity of many health systems in low- and middle-income countries. There is a natural evolution to each country’s progress in scaling-up KMC coverage and complementing it with other key interventions in the postnatal period and with adequate follow-up.

As shown in Figure 1, the most effective approach to KMC evolution proceeds along three stages: 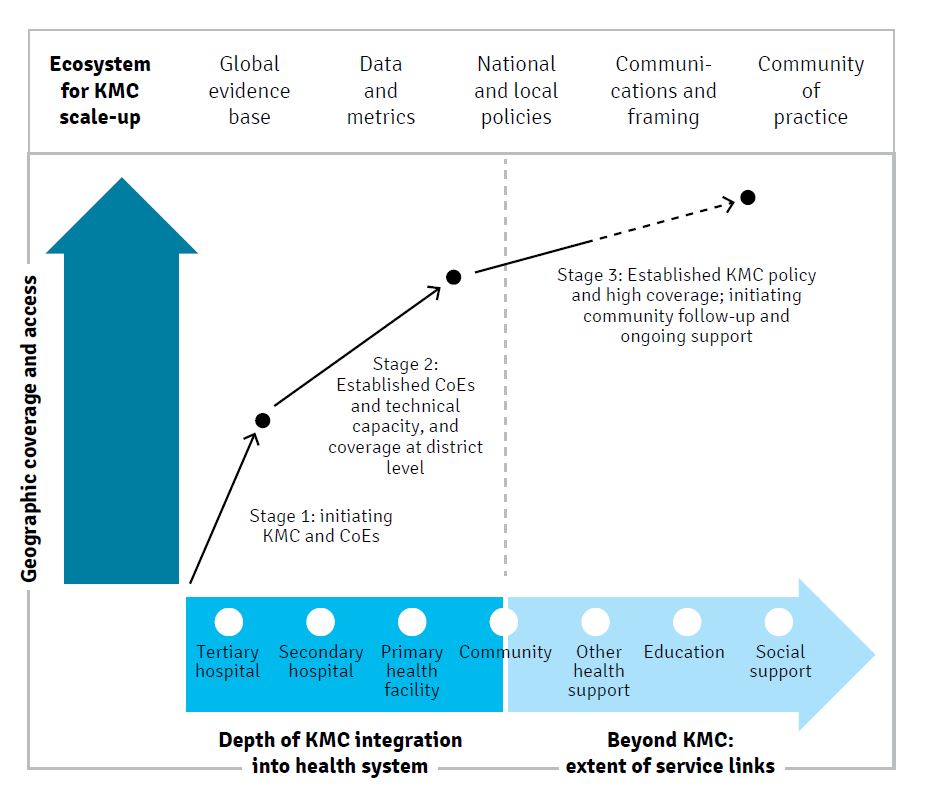 A primary driver of KMC expansion over the past 20 years has been committed practitioner champions. In particular, the Kangaroo Foundation of Colombia has trained hundreds of practitioners, who have then been capable of establishing KMC in their home hospitals.

The degree of spread beyond those initial KMC implementations has varied widely, as it requires the commitment of many different stakeholders to implement and scale successfully. Several studies and systematic reviews have already identified health system enablers and obstacles to implementation and dissemination of KMC (Seidman et al., 2015; Chan et al., 2016). For example:

Key stakeholders for country scale-up – ministries of health, other government institutions, professional societies and non-health actors – have often not been sufficiently engaged. Lack of strategic alignment across sectors has meant that efforts to scale KMC have often met resistance at the hospital, regional, and national level, despite the strong evidence for the efficacy of the practice. More effective progress will require greater strategic alignment as well as stronger country-level leadership.

A strategy for ‘KMC and Beyond’

To accelerate the pace and widen the scope of ‘KMC and Beyond’ implementation, we envision three mutually reinforcing initiatives, as summarised in Figure 2: 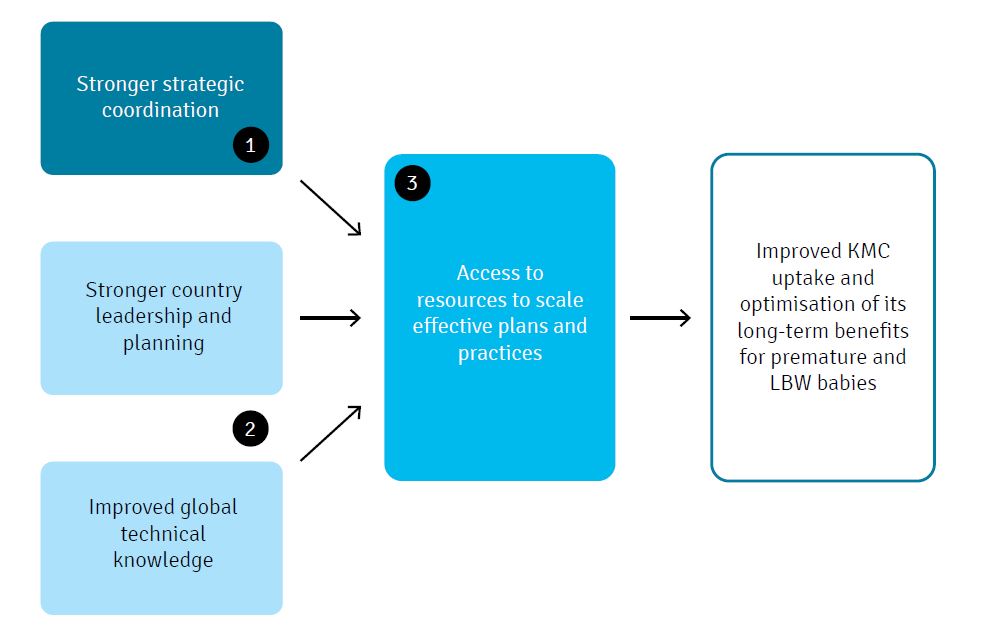 Figure 2: Initiatives for ‘KMC and beyond’

KMC has come a long way in the last 20 years – but millions more premature and low-birthweight infants around the world will have their lives transformed if we can find more effective approaches to further scale-up this evidence-based, low-cost intervention.

Acknowledgements
Adriano Cattaneo of the International Kangaroo Care Network, and Jenny Rabinowich, Matthew Rehrig, and Moitreyee Sinha of Global Development Incubator, collaborated on an earlier concept note from which this article is drawn. Grand Challenges Canada provided funding for the effort. 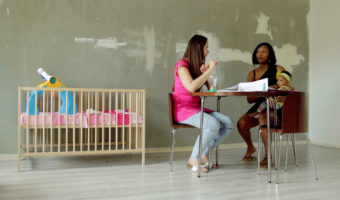