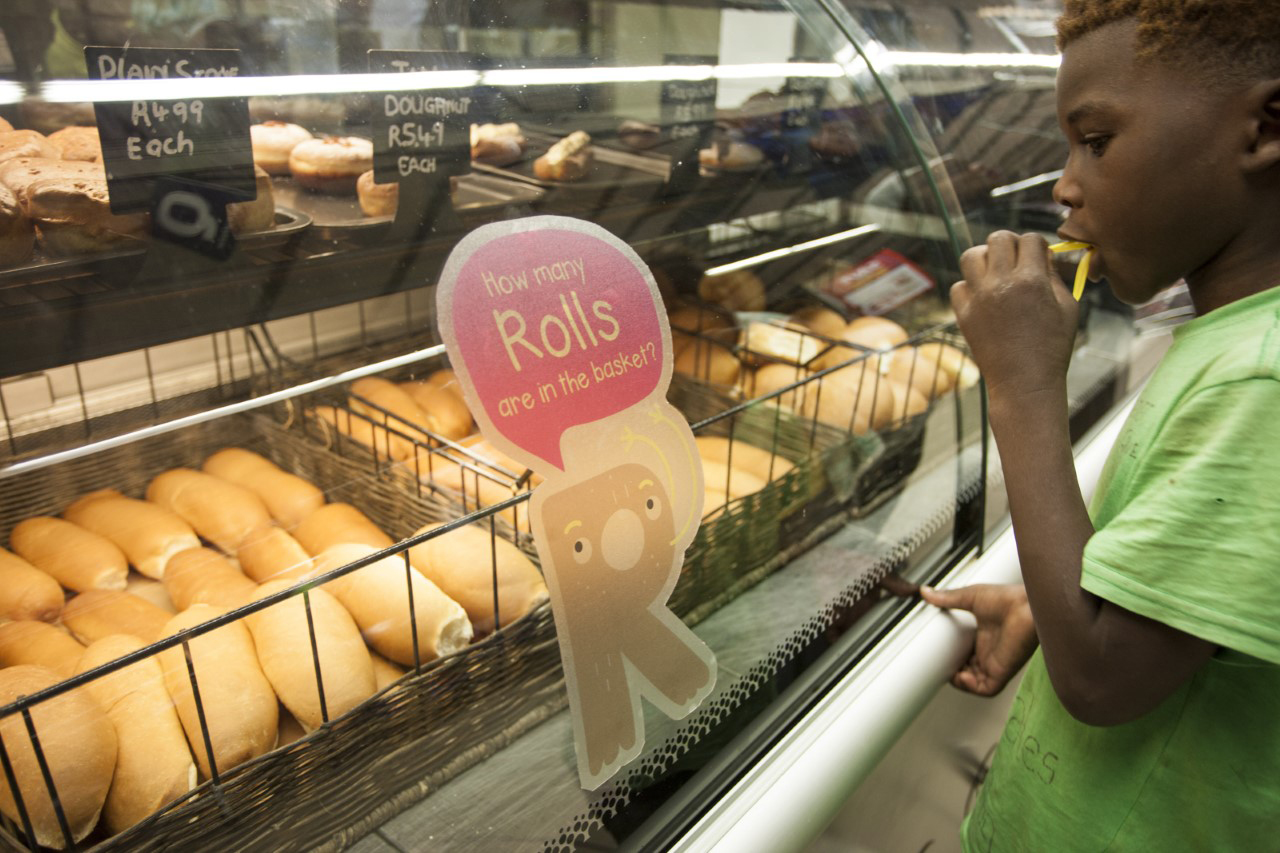 In discussions about how to close educational
gaps, most of the emphasis is on schools.
However, over the course of their childhood
children spend only 20% of their waking hours
in school. Playful Learning Landscapes (PLL) is
a culturally adaptable and sustainable way to
augment learning opportunities in the time that
children spend outside school, with their families
and communities.

Research shows that PLL promotes caregiver–child communication in ways that support behavioural outcomes for both caregiver and child – for example, it enhances language learning and relationship building, encouraging children’s talk about numbers and letters
and their spatial skills (Bustamante et al., 2019; Hassinger-Das et al., 2021). Such behaviour changes in young children have been shown to improve outcomes in school and beyond (Gunderson & Levine, 2011; Pruden et al., 2011; Sheridan et al., 2011). PLL uses a three-part equation to embed playful learning principles and design elements in everyday spaces such as bus stops, parks and supermarkets – transforming them into enriching, social spaces
for families.

PLL captures the voice, values and culture of each community through human-centred co-design, drawing on community-based participatory action research (CBPR). The use of a CBPR framework builds on a community’s funds of knowledge and ensures that any design is welcoming to caregivers and children (Collins et al., 2018). When a community has ownership of a place, its members are more likely to participate in activities in that place with children and neighbours. Behaviour is more likely to change.

Urban Thinkscape, for example, transformed an abandoned lot next to a bus stop in West
Philadelphia. Behavioural scientists and community members worked together to design and install puzzle benches and modified hopscotch games at a bus stop that stood on the site where Martin Luther King once gave a Freedom March speech.

In Santa Ana, California, researchers partnered with Latine caregivers originally from Mexico to create community spaces that represent their cultural values and practices (Bermudez et al., forthcoming). They co-designed a giant abacus at a bus stop to prompt caregivers and children to count and talk about numbers while waiting for the bus. The concept was selected by caregivers who had learned maths with an abacus. Feedback from community members was solicited throughout the design process, including the creation of prototypes for families to play-test.

The second part of the PLL equation captures how children learn. PLL is built on the scientific
basis of “playful learning”, a theory fusing play – in particular, guided play – and learning. Playful learning is currently gaining wider momentum, with other initiatives including the LEGO Foundation’s Build a World of Play Challenge, KABOOM! and Urban95. It offers a set of characteristics that, when woven into playful structures, encourages intentional and thoughtful behaviours and interactions that build social and academic capital. 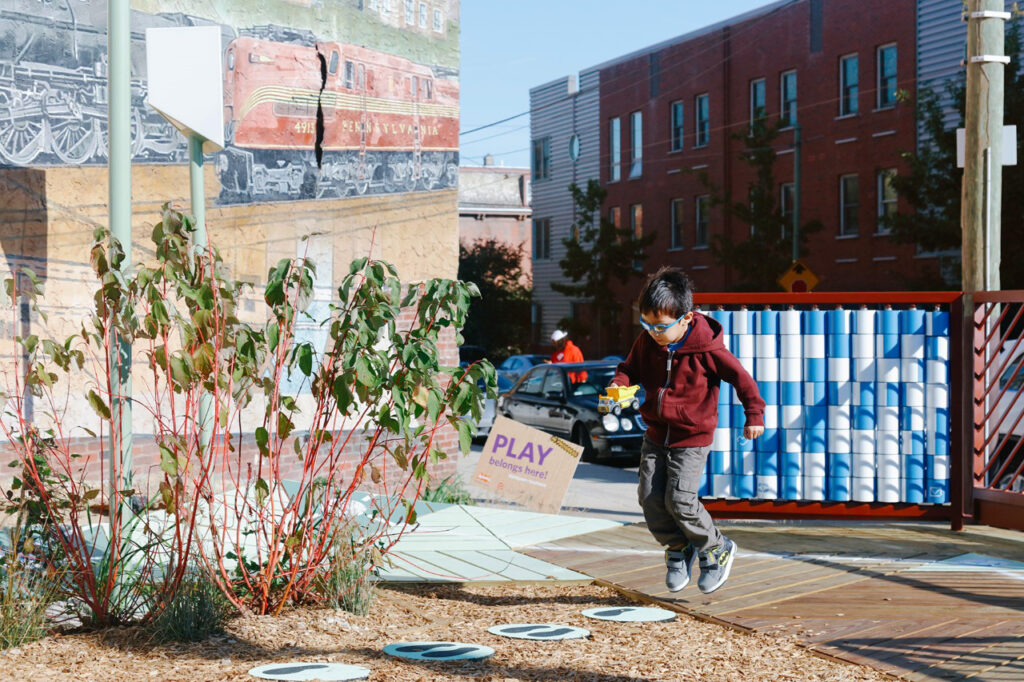 Guided play sits at the middle of a spectrum anchored by free play (directed and initiated by children) and direct instruction (directed and initiated by adults). Guided play is inspired by adults but led by children as they work towards a learning goal – which could be in vocabulary, science, technology, engineering or maths. Adults curate opportunities for children with a learning goal in mind. Community members easily learn the characteristics that support guided play, and work with the team to create builds that weave science into the design.

The third part of the PLL equation captures what children need to learn in order to thrive in an everchanging world. PLL focuses on six characteristics that directly relate to behaviour changes in child outcomes. The Six Cs – collaboration, communication, content, critical thinking, creative innovation, and confidence – are rooted in the science of learning and are also highlighted by business executives as important for career development in later life (Golinkoff & Hirsh-Pasek, 2016; Hirsh-Pasek et al., 2022).

For example, in “Jumping Feet” – an activity included in the Urban Thinkscape intervention – designs on a series of stones show either one shoe print or two, and signage encourages the child to put one foot where they see two and vice versa. This twist on hopscotch is based on a task used by developmental researchers to gauge children’s memory and attention. It targets executive function skills, such as focus and impulse control, which are better predictors of reading and maths outcomes than IQ scores (Zelazo et al., 2016). Jumping Feet
also prompts caregiver behaviour such as working together to solve problems and targeted question asking (Gaudreau et al., 2021), another key way to enhance child outcomes.

To date, communities have been enthusiastic about PLL and the reach is now at more than 50 cities around the globe. Showing examples of what can achieve behaviour change inspires communities to embrace the PLL movement and come up with their own ideas for altering neighbourhood spaces in educationally rich ways. 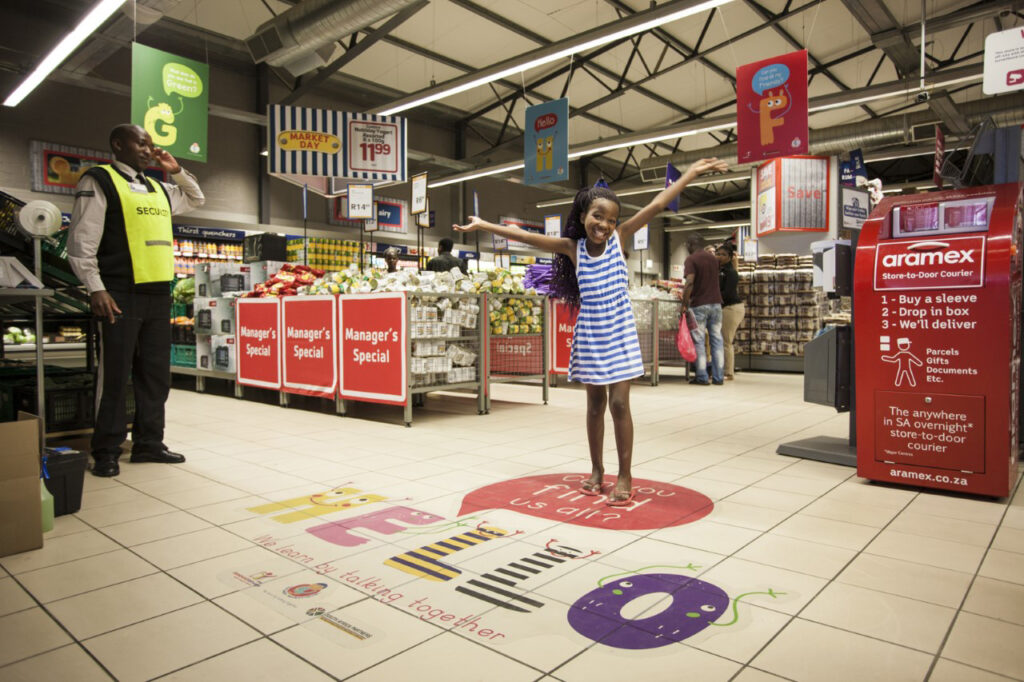 “Our research demonstrates conclusively that intentional design can change behaviour in ways known to foster positive outcomes for children.”

Our research found that Urban Thinkscape led to a significant increase in quality caregiver–child interactions, including conversations around language, literacy and STEM. The proportion of caregivers using language relating to numbers, colours and letters, for example, rose from 2% before the interventionto 36% after. The  installation was also found to have heightened the community’s sense of pride and civic engagement, which discourages undesirable behaviours. Since installation, this site has been free from graffiti and maintained by the community (Hassinger-Das et al., 2020).

Such results offer proof-of-concept that using the science of learning to design public spaces in lowincome neighbourhoods can have a transformative impact on how caregivers and children engage (Hassinger-Das et al., 2021). An increasing number of children are growing up in communities that are under-resourced and socially, economically and racially stratified. In such communities, PLL is a promising way to engage families and build
community cohesion while promoting behaviour changes in everyday spaces, stimulating STEM, literacy and 21st-century skills.

“The science of learning to design public spaces in low-income neighbourhoods can have a transformative impact on how caregivers and children engage.”

Such results offer proof-of-concept that using the science of learning to design public spaces in low-income neighbourhoods can have a transformative impact on how caregivers and children engage (Hassinger-Das et al., 2021). An increasing number of children are growing up in communities that are under-resourced and socially, economically and racially stratified. In such communities, PLL is a promising way to engage families and build community cohesion while promoting behaviour changes in everyday spaces, stimulating STEM, literacy and 21st-century skills.

Helen Shwe Hadani is a Fellow at the Brookings Institution in Washington DC, where she conducts policy-focused research on the benefits of playful learning in both formal and informal contexts. She has more than 25 years of experience in research and has worked with toy and media companies including Disney, Sesame Workshop, and LEGO.

Kathy Hirsh-Pasek is the Lefkowitz Faculty Fellow in Psychology at Temple University and a Senior Fellow at the Brookings Institution, Washington DC. Her research examines the development of early language and literacy, the role of play in learning, and learning and technology. Author of 16 books and hundreds of publications, she has won numerous awards in her field and was inducted into the National Academy of Education. Her Becoming Brilliant (2016) was on the New York Times Best Seller list. Her Making Schools Work will be released in late 2022. 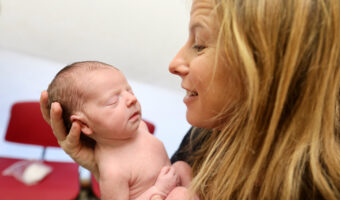 What pregnancy taught me about behavioural science