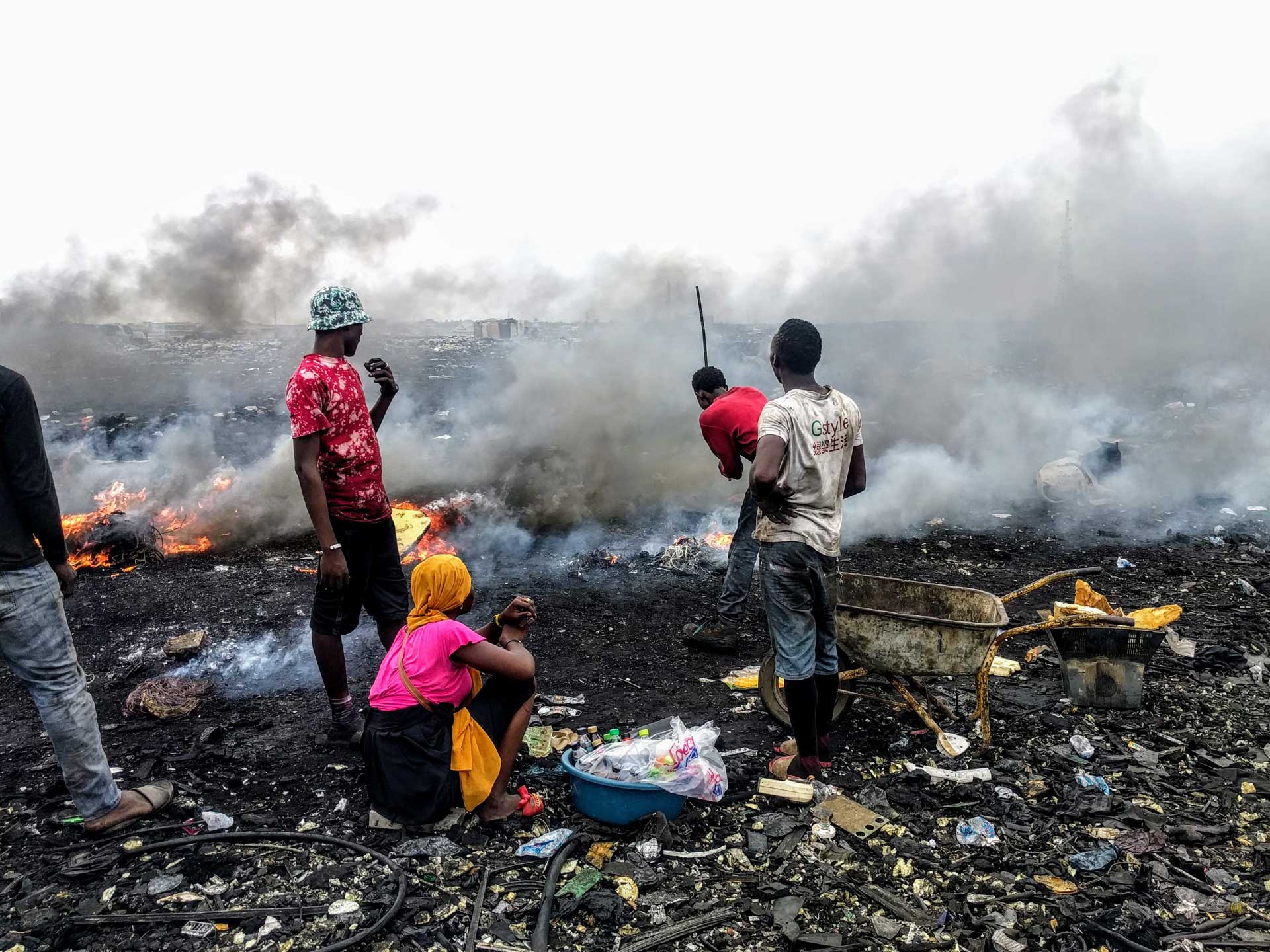 Mobile phones, tablets and laptops have become an essential part of life, but their improper disposal is part of a mounting problem. Electrical and electronic waste, known as e-waste, is the fastest-growing type of domestic waste in the world. It contributes to climate change and contains dangerous substances, exposure to which has been linked to a variety of health issues, including impacts on pregnancy, affecting healthy brain development and thyroid function. Children and pregnant women are especially vulnerable to these health issues as they are going through critical stages of sensitive development that, if disrupted, can have lifelong effects on their health.

E-waste includes any items with electronic components, from refrigerators to washing machines, as well as some toys, devices used in sport, and medical equipment (United Nations Environment Programme, 2019). In 2019, the world produced an estimated 53.6 million tonnes of e-waste, but only 9.3 million tonnes of this was properly collected and recycled, using appropriate safety equipment and infrastructure (Forti et al., 2020).

Some of the remaining e-waste is stored in warehouses, homes and garages. Some is dumped in landfills. The e-waste that causes the most harm is exported, often illegally, for recycling in the informal sector in low-income countries, with inadequate safeguards. When it arrives, women and children are among those who process it. They dismantle items by hand, potentially exposing children to sharp objects, and releasing hazardous metals such as lead. They burn and heat it, to retrieve copper and other valuable substances. And to extract precious metals such as gold, they perform acid leaching, using cyanide salt, nitric acid or mercury (Heacock et al., 2018). These activities can release some 1,000 different toxic substances into the environment (Widmer et al., 2005).

Informal e-waste recycling is illegal in many countries and is considered a form of hazardous child labour. Consequently, it is often hidden and there are very few precise figures on how many people work in e-waste recycling. Reliable estimates of the children involved are particularly sparse, but some as young as 5 have been observed working at e-waste sites in Ghana (Greenpeace, 2008). Worldwide, an estimated 18 million children work in the industrial sector, which includes waste processing, and as many as 12.9 million women are involved in the informal waste sector, including an unknown number of women of childbearing age (International Labour Organization, 2017; World Health Organization, 2021a). The lack of reliable data on children and pregnant women working with e-waste is one of the most significant challenges facing the health sector and policymakers when addressing the effects of informal e-waste recycling activities.

Children can be exposed even if they are not themselves engaged in recycling: through their skin from contaminated toys, corrosive substances and other items, such as clothing, brought home by parents working in e-waste recycling; by inhaling contaminated air; by ingesting contaminated food, water, soil, dust and breastmilk; and from transplacental exposure during pregnancy.

Action on e-waste can help both children and climate

Children and foetuses are particularly vulnerable to chemicals released through e-waste recycling activities because their organs and immune systems are still developing (Grant et al., 2013). The World Health Organization (WHO, 2021a) has recently published the ground-breaking report Children and Digital Dumpsites: E-waste exposure and child health. The report draws on original research conducted at e-waste recycling sites around the world by scientists, academics and healthcare professionals. E-waste recycling is an emerging health issue and, although research in this field has expanded over the past ten years, most studies have been conducted in China and Ghana.

‘The lack of reliable data on children and pregnant women working with e-waste is one of the most significant challenges facing the health sector and policymakers.’

Studies investigating pregnancy and child health have found associations between e-waste recycling activities and miscarriage, stillbirth, impaired neurological development and changes to thyroid function. These issues can cause potentially lifelong health problems. Additional health effects identified include changes to lung function and the respiratory system, including cough and asthma; changes to the cardiovascular system; and weakened immune system, including greater vulnerability to infection, reduced immune response after vaccinations, and higher rates of allergies and autoimmune diseases. A small number of studies have investigated the possible links between e-waste exposure and chronic diseases, such as cancer, cardiovascular disease and hearing loss; however, too few studies have been conducted to draw conclusions on these individual outcomes (WHO, 2021a).

Many of these problems may be latent, appearing only later in a child’s life and placing significant long- term burdens on children, their families and health systems.

As well as harming children, informal e-waste recycling contributes to climate change. In 2019, improper disposal of refrigerators and airconditioners was responsible for releasing the equivalent of 98 million tonnes of carbon dioxide into the environment – or 0.3% of global energy-related emissions (Forti et al., 2020). This is partly because refrigerators and air-conditioners contain chemicals that emit greenhouse gases, and partly because when materials are not recycled and reused, new items are produced instead, generating emissions.

Action to improve e-waste recycling can therefore benefit both children’s health and climate change. International and regional conventions, such as the Basel and the Stockholm Conventions and the Bamako and Waigani Conventions, already exist to prevent the transboundary movement of items containing hazardous chemicals, but not all countries have ratified and implemented them. Even where conventions have been ratified, they can be difficult to uphold due to lack of e-waste management training and infrastructure, or the practice of circumnavigating regulations by hiding or mislabelling e-waste among other items or registering e-waste as charitable donations. It is also difficult and time- consuming to check that individual electronic items function properly.

In 2019, 78 countries, covering 71% of the world’s population, had some form of e-waste policy, regulation or legislation (Forti et al., 2020). However, countries also need to ensure that e-waste policies are effectively implemented and enforced, and must develop national e-waste legislation that incorporates health-relevant targets and eliminates child labour. Additional ways to address the problem include awareness raising and education on e-waste, and conducting research, including better data collection and surveillance of toxic exposure from e-waste (WHO, 2021a). 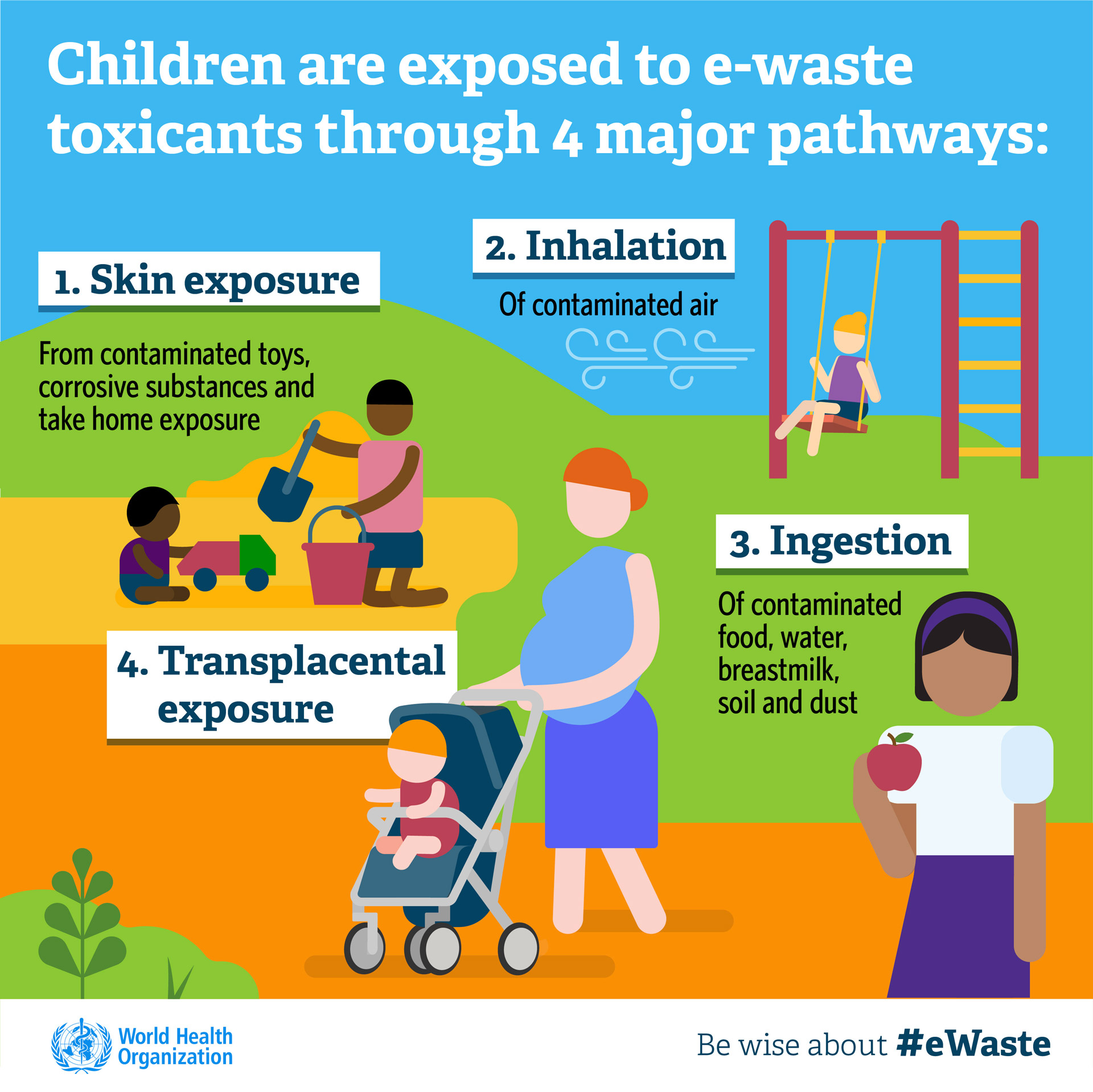