Returning the city to children 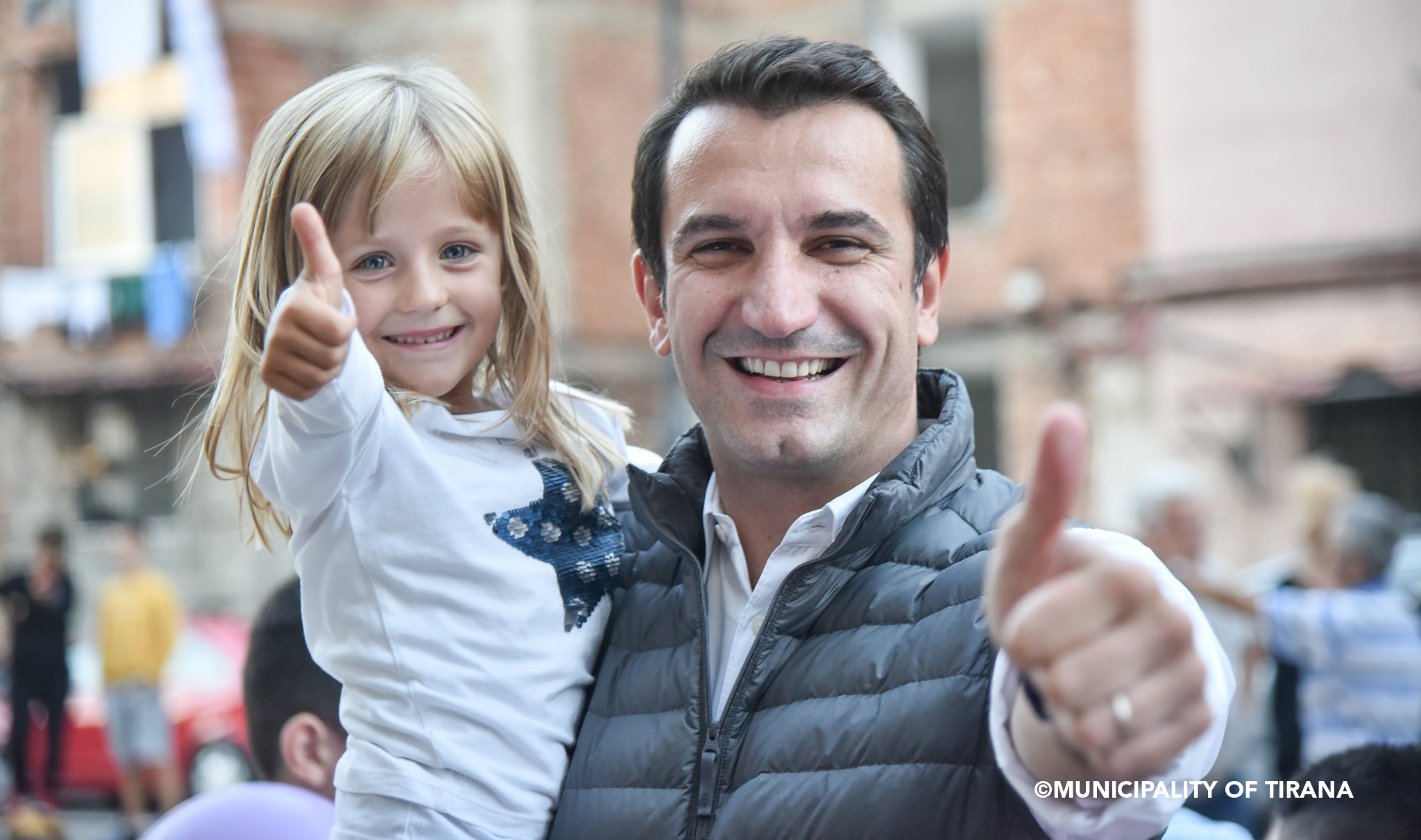 The Mayor of Tirana, Erion Veliaj, in one of city’s many new playgrounds. Credits: Municipality of Tirana.

This year Tirana marked its 100th anniversary as the capital of Albania. A city that is well known for its colours, contrast, diversity and cultural intersections, and with a rich history embodying Ottoman, Italian and Soviet influences. Immediately after the fall of the harshest Communist regime in Eastern Europe, Tirana looked like the capital of North Korea. It was a city of 170 thousand people with 170 cars, to which only elites and party cadres had access. The rest of the population commuted by walking or biking, not by choice but because of poverty.

The fall of Communism had a radical impact on the city’s infrastructure and social life, deeply affecting its mentality and lifestyle. Tirana experienced a painful transition process with a chaotic urban transformation. Suddenly people rushed to the capital from every corner of the country, seeking new opportunities and a new life. In 30 years, since the fall of Communism, Tirana became a city of one million people and 170 thousand cars.

When we took office five years ago, we inherited a city full of cars, disordered traffic, pollution, illegally occupied public amenities and, above all, no play space for children. In 25 years of democracy, children had been forgotten and left out of any urban planning and policy agenda. Advocating for child- friendly infrastructure in a city that was experiencing rapid urban expansion and population growth under tight budget constraints sounded like madness. It required innovative, creative thinking to push forward such a salient issue.

Under these circumstances, options were limited. We commenced working on child-friendly infrastructure through ‘urban acupuncture’1 – pinpointed interventions that allowed us to spark small changes that could catalyse outsized social impacts. Attaching a sense of ownership to the city transformation process was a pivotal move to counteract the apathetic behaviour that was commonplace among the citizens of Tirana.

On day one at the office, we were all aware that infrastructure for children was poor, but we weren’t able to gauge the real situation until we experienced for ourselves the conditions in kindergartens in the city. It was appalling. They looked like prison cells: no wonder we had so much violence, rudeness, and trash in the streets. We discovered that we had, unwittingly, been living in a city with no care or love for children.

From ‘adopting a kindergarten’ to ‘days without cars’

Soon after this revelation, we organised a large ‘adopt a kindergarten’ campaign in our city. We called companies, designers, practitioners, students, and everyone with the energy and willingness to help. In record time, we succeeded in transforming our kindergartens into open spaces, full of colours, vivid decorations, and all the required amenities. The response was fantastic. Therefore we decided to push further by freeing all the occupied spaces within kindergartens and schools that people were using as car parks.

Keeping in mind that children’s growth and cognitive and behavioural development are connected to what happens outdoors, we decided also to focus on playgrounds and parks, and mobility to these destinations. This was an opportunity to improve children’s well-being by allowing them to experience the city and create a connection with the world around them.

We managed to build a state-of-the-art playground for kids at Lake Tirana, having unexpectedly encountered a great deal of resistance from citizens – and politicians – to constructing ‘inside’ a park. On the day the playground opened, the place looked like a rally – not with adults, but with children playing. This success motivated us to build more and more playgrounds in every part of the city, in every space previously occupied by cars. We went on to build 60 new playgrounds, and today almost every neighbourhood of the city has an area dedicated to children.

Interestingly, these playgrounds are now being used not only by children but also by elderly people and young parents. Older people use them as recreation spaces. Young parents take the opportunity to feel more relaxed than before, leaving their kids playing outdoors, while using the time for professional engagements.

During the pandemic crisis, people have come to realise that the air in the city is much cleaner and the city itself much quieter and safer without cars.’

Eager to see more changes in this regard, we went further, introducing the ‘days without cars’ and ‘let’s clean Tirana in one day’ initiatives. Adults went ballistic again, complaining and resisting – but this time we knew what to do. We returned for support to our best allies: children. They didn’t let us down. As always, they fully participated in these initiatives to enjoy a day without cars and help clean up the city. With a fascinating force for change, children became our top advocates in transforming Tirana into a child-friendly city.

Today, Tirana has much more to offer to children. We transformed Skanderbeg Square into an exclusively pedestrian square. What used to be 40,000 m2 of roundabout, dedicated to cars, is currently Tirana’s biggest playground, where children can enjoy a car-free day at any time in much cleaner air. We are also embellishing Tirana with a green belt of two million trees, which will be pivotal in addressing the environmental concerns of the city.

A legacy for a resilient city

Four years ago, we joined the Green Cities Framework and, together with the European Bank for Reconstruction and Development, developed the Green City Action Plan for Tirana. Based on our measurements, cars in Tirana made 800,000 trips a day, of which 400,000 were within a distance of 500 metres. These astonishing figures increased our determination to beat the dominance of cars and use public space for more playgrounds, pocket parks, wider pavements, bike lanes, and days without cars.

This action plan laid the foundations for improving the quality of the surroundings, health, and well-being of our children and families. During the pandemic crisis, people have come to realise that the air in the city is much cleaner and the city itself much quieter and safer without cars. They have understood that in a city where there are no heavy industries, the most prominent pollutants are cars – real-life enemies not just to them but their children too. They also realised that it is actually possible and much healthier to reach destinations within a kilometre by walking or cycling together with their children.

People have learned another vital lesson from the coronavirus. What makes cities resilient during a crisis is not wealth and power, but knowledge and unity. Through our previous investments in kindergartens, playgrounds, wider pavements, and bike lanes, together with our citizens the city of Tirana had already embarked on an extraordinary journey in transforming not only children’s education infrastructure but their mindset too. What started as acupuncture interventions transformed into a road map for the future of the city. Suddenly, our mission to return the city to the people changed to returning the city to the children.

While the pandemic is not over yet and streets are still empty of cars, we are intensively working to seize this moment to reallocate more space to pavements and bike lanes. Tirana is also developing nine new polycentric areas to rebalance the city’s density and supplement each area with new schools, kindergartens, parks and playgrounds. The aim is to agglomerate essential services within a kilometre – walking distance. The best part is that all urban projects in Tirana are embracing Urban95 and ‘8 to 80’2 concepts to design infrastructure from the perspective of a child.

‘In 2050, children born today will reach the age of 30 – ready to run our cities.
How we raise and educate them will impact the resilience of Tirana in the next 100 years.’

Child-friendly infrastructure would have no value if children could not travel safely on foot or bike to their favourite destinations. Therefore we are working with the US National Association of City Transportation Officials (NACTO) Global Designing Cities Initiative, through the Streets for Kids programme, to design and build child-friendly streets. In cooperation with the Albanian–American Development Foundation, the Pyramid of Tirana – a symbol of Communism – is being transformed into an ‘educational cathedral’, one of the newest locations of the TUMO Center for Creative Technologies. This new centre will provide more public space for children to socialise and receive quality education through a range of programmes that will include teaching the basics of IT and coding.

Our ambition is to leave our children a city where they can be more healthy and energetic, thrive, and grow into adults who will carry on the transformation of Tirana for the next 100 years. We are aware that we cannot achieve this ambition alone without the help of parents. In this hectic world, it is essential that they stay focused on their priorities, balancing their responsibilities and identifying the real needs of their young children – we are working on this, too. We have already designed heartwarming initiatives turning parents into ‘classmates’ who help their little ones complete their assigned homework. The Municipality is also developing a ‘good parenting’ guide to help young parents with educating and raising their toddlers responsibly.

In 2050, children born today will reach the age of 30 – ready to run our cities. How we raise and educate them will impact the resilience of Tirana in the next 100 years. Building and designing our city for them is like sketching the blueprint of our future. I often say that the most significant infrastructure project to change in a city is not a boulevard, nor a big building; we know how to do those. It’s the 10 cm between our ears – our thinking and mindset – that is the toughest of infrastructures to transform. The future belongs to the children.

1 For a description of urban acupuncture, see www.arup.com/perspectives/urban-acupuncture
2 For further details, see: www.880cities.org/ 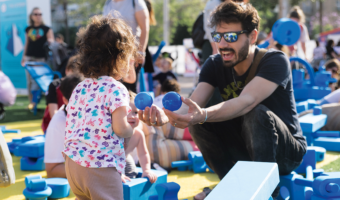